GIVE TO A FUND

The Community Foundation of Grand Forks, East Grand Forks & Region is a nonprofit, community foundation created by and for the people of the region to encourage a spirit of philanthropy.
​
Working in partnership with individuals, families, businesses, and trusted advisers, the Community Foundation manages charitable funds and provides grants to qualified nonprofit organizations and causes. The Foundation has granted over $12 million to create stronger, more vibrant communities across the region.

To connect people who care with causes that matter.
​​

The Community Foundation is:

Beginning years as reported by Mike Maidenberg, President of the Foundation Board of Directors on August 9, 1999.

Community leaders had been discussing the need for a community foundation since the beginning of this decade. The concern was that there was no local institution that addressed broad-based philanthropy in the way a community foundation can. The North Dakota Community Foundation, based in Bismarck (255 miles away) seemed too distant to be a solution. The Fargo-Moorhead Area Foundation (80 miles away) was another alternative, but Grand Forks was concerned about being able to steer an independent path. To be subsumed under Faro-Moorhead would have discouraged local giving, in the judgment of community leaders.
​
There was a working committee that met once or twice a year. The last meeting ironically, was two days before the flood on 1997.

As it turned out, the Kroc dollars went through the North Dakota Community Foundation. But those of us who wanted Grand Forks to have its own community foundation thought there was a gaping hole by not having a foundation in place. Even though Kroc said she wanted all her funds to pass through, we felt that in the case of this gift or future gifts, there ought to be a way to transform the giving impulse into philanthropic endowment.

So on November 21, 1997, the foundation was incorporated. Tom Clifford, former president of the University of North Dakota and chair of the Mayor’s Task Force for Flood Recovery, was a key member of the group urging that the foundation get under way.
​
On January 18, 1998, we receive our provision 501(c)3 status, and organized the board. We adopted a set of bylaws, and I assumed as its president.

The Community Foundation of Grand Forks, East Grand Forks and Region will make available for public inspection its annual audited financial statement and the last three years of its tax documents, including Internal Revenue Service Forms 990.

Questions concerning documents should be addressed to either the Executive Director or President.
2021 Annual Report 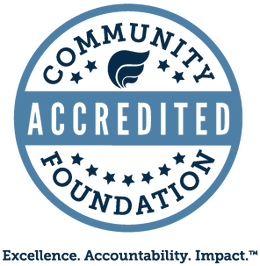 Connecting people who care with causes that matter.